Got your hands on a new anime/manga title? Discuss here!

Got your hands on a new anime/manga title? Discuss here!

For this thread, talk about any anime DVDs/downloads or manga books/downloads you recently got a hold of. But only if you never saw or read them before.

A few days ago during the neighborhood sale, I got myself four manga books. All volume ones of various series:

All from the Shoujo-Beat line up. The only one I've seen was the Honey and Clover anime (never finished) but not the manga. Any of you seen or read these four titles? If so, tell me what you think! I'll have my thoughts on each soon, I plan on reading them after I give the Mai-HiME manga a second read.

Yeah, I've read all of them to some degree. Though only a chapter or so from High School Debut. I was subscribed to Shoujo Beat until it was canceled. ;-;

As for what I think of them, Honey and Clover is the series that grew on me. At first I didn't care for it at all, but the characters were really nice and since I'm an art major, it kind of reminded me of some things in college. xD

Absolute Boyfriend: I read it from beginning to end. It was an enjoyable read, but it was never one of my favorite Watase manga.

Vampire Knight... I'm probably one of the few people who will say that I absolutely dislike this series. I read every chapter that was in Shoujo beat, but it always felt so boring and 'strained' in story for me. I've never enjoyed any of Hino's manga before, actually... I try, I really do(Especially since her art is so pretty), but I just can't get into any of them.

As for my recent titles... actually, there haven't been any anime or manga yet, but I did finally buy vol. 5 of the original X-men DVDs. XD I have the whole series now! Whoooo! XD 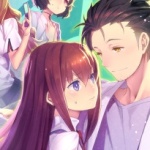 Absolute Boyfriend doesn't tell me anything, but Zettai Kareshi does ;P Brave German people didn't change the title ^_^
I like it, but it isn't one of my favourites either. After this one I stopped reading Yuu Watase mangas :0

Except from Vampire Knight I haven't heard of one of them. I didn't read and I didn't watch VK. I am just not interested in it or so o.o

I am reading many mangas at the same time O_o (most of them are shoujo-ai or yuri). You know, have to wait for the next chapter releases ;D

Anyway, my last read was
Pumpkin and Mayonnaise (no shoujo-ai / yuri ;P). I liked it a lot. I think it tells how live is and how it changes through the years. I liked the drawings, too and I will read more of this mangaka ^_^

I recently picked up "My Girlfriend is a Geek". I didn't like the first half so much and if felt kind of boring, but after the main character starts going out with the fujoshi, it becomes quite entertaining. x3 I actually feel sorry for the guy in here since he's straight, but is put in 'awkward' situations. 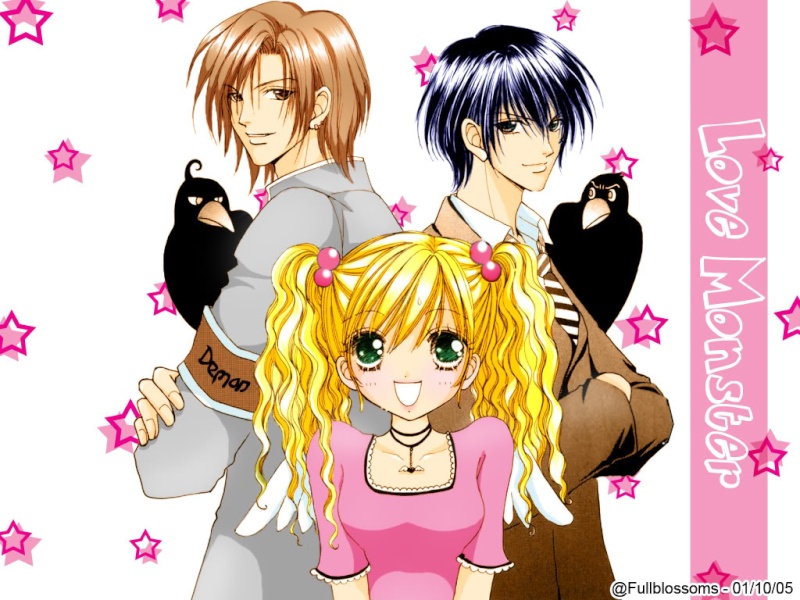 anyone check out Love Monster yet???
l love this manga series! art is so awesome and it gets pretty twisted later on. -hehehe-
i wanna be Hiyo Osora at times >.< tho she can be major FAIL at times.....-laughs-

I stopped at F.Y.E. on my way home from work to check out their anime sale. Two very cheap DVDs popped up that I've never seen before. Arjuna and Fafner. They only had the 2nd volume of Fafner sadly, so I won't be talking too much about that one (spoiler city). Neither of these two are new obviously, just new to me so here are cute thoughts on each so far: 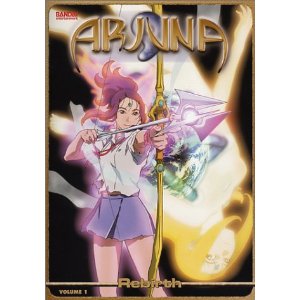 Arjuna or Earth Maiden Arjuna is a beautifully animated epic (dubbed by our frenemies: Bandai Entertainment) about a girl named Juna who dies for a brief time and then gets chosen to become the "Avatar of Time" and save the planet.

Save it from what you ask? These CGI monsters called the Raaja...or so I thought. By the end of the first disc, it became clear what the real enemy was. Pollution. I have nothing against protecting the environment, but these kinds of stories are a bit preachy. Who knows, maybe things will change if I ever get a hold of the next volumes. The action and animation is very beautiful, and the CGI scenes kinda bothered me at first. 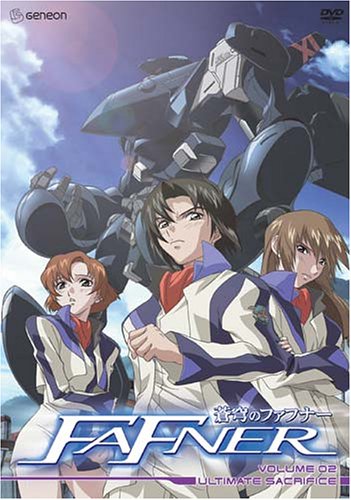 I started with volume two of Fafner and there is plenty of spoiler. So far it's kinda like Evangelion. Chosen youngsters battle mecha entities who want to destroy humanity for reasons not made clear yet. All I can really say about this volume is how emotional it was. I didn't even get to know this one female character and her little escapade got to me.

I always forget that I want to rewatch Arjuna, oh well...

Kanamemo
Nakamachi Kana is a junior high school girl. Her grandmother passed away and she was left all alone. She finds a newspaper carrier station and starts working as a live-in carrier. Her room has a hole in the wall. Other female workers living next doors come in through the hole and start a wild merrymaking.

It's nice, but not more ö.ö It would be amazing, if something... different would happen.

Akira to Hiyori
Akira Azuma is a tall, attractive, but aloof Kusunoki High School freshman girl and all-around athlete. Hiyori Motohashi is a short Kusunoki freshman girl in the school's broadcasting club. While trying to set up coverage on Akira, Hiyori finds herself attracted to Akira's mysterious charm.

That's better : D It's just fun to read about Hiyori, she is so cheerful *giggles*

Nana to Banana
On the world that consists of a single giant continent called Dokkanon, most people have some kind of special ability. Those who have a high-ranking ability, such as the ability to control water, are respected and granted much power. Those with low-ranking abilities, such as Nana, who controls bananas, and her best friend Ringo, who has super-powerful legs, have very little power in society. When Nana and Ringo were kids, they were awed by stories from Ringo's adventurer father about a land called Oz, where a god lived who could make any wish come true. Nana and Ringo swore that they would go adventuring together when they were adults. But as time went by, Ringo's father vanished while adventuring, and Ringo became much more aware of the social stigma associated with adventurers. Will the two of them find the strength and courage to follow through with their promise?

Something you wouldn't read, because of the title?? Oh, come on! XD The manga is like the title sounds: FUNNY and strange, but in a good way :3

Momo, Botan & Lily Blossoms
In a certain town there is a slightly odd maid café named Sasanqua. The most popular maid in the shop, Botan, has just received a love confession from the new girl, Momo, and can't help but have Momo on her mind. W-w-w-w-what if this is love!? E-even though we're both girls!? Why am I having these feelings!? This is a clashing-style maid café love (?) comedy.

Actually I don't have to add anything else, do I?? Hmm, maybe this: I love it XD

My most recent titles would be stuff for Slayers and Magic Knight Rayeath. Since then, I haven't really been in a position to add more stuff to the "weeb" shelf haha.

Stuff I'm currently watching... or should I say ... picking away at ... are Ikkitousen (I'm watching through all of it season by season, FINALLY.)

Naruto Shippuden. Which, with a mindful eye, is actually not that bad at all Subbed!

Besides that there's Sailor Moon S, which I am currently re-re-re-watching through again, as well as Ranma 1/2, Bubblegum Crisis Tokyo 2040, and am reading both the Ranma manga, and Tokyo Mew Mew, but am actually thinking of dropping Tokyo Mew Mew... sadly... because the story-telling is not sucking me in.

^ Just before getting into those manga, I had re-read all of Magic Knight Rayearth and Mai-HiME.

I stopped watching basically anything for quite a bit but... Vivid Strikers. Ah, yes, the tiny Takamachi and friends pick up an orphan. It feels like the episodes should be five minutes long, though. Nothing is happening! I was introduced to it by watching the scene where Rinne literally beats her bullies to a pulp... it was brutal.

I had to watch it. I'm giving it a chance, still. I don't really have high hopes.

I haven't been watching many new series as of late. Been trying to re-watch a ton of series to see if my opinion of them or (rating of them) has changed over these past few years. I am looking forward to getting my hands on the New OVA + Movies collection for Ranma 1/2 on BD that comes out this September though!! :3

Amazon Japan has such great shipping policies that I can't help myself when it comes to ordering things from there. 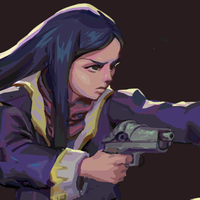 I recently got my hands on three new manga books. Volumes 1-3 of The Ancient Magus' Bride. It's a really good series with an equally great anime adaptation. It's actually one of my top 10 favorite series right now. I just love Chise's Character in the series for her strength and hardships. I've also recently re-read the Mai-HiME manga, and found it to be every bit as enjoyable as it was the first time I read through them. I have plans to eventually buy the Mai-Otome manga collection as well, but for now I'm going to be focusing on getting all the current volumes for The Ancient Magus' Bride.